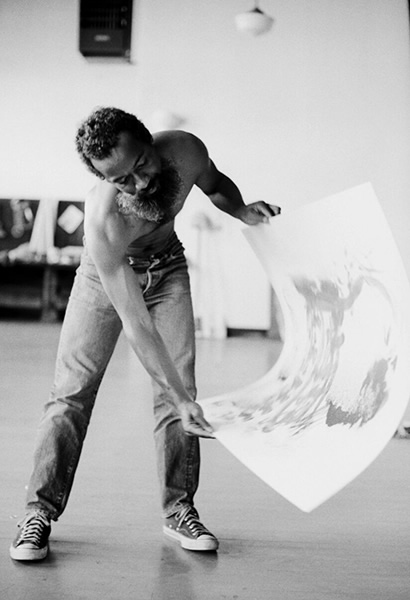 Taken from the Hauser & Wirth / Ursula Website, here’s a conversation with Bruce about his work with artist David Hammons

On the occasion of ‘David Hammons: Body Prints, 1968–1979,’ at the Drawing Center in New York, the first survey of a pivotal aspect of Hammons’ early career, ‘Ursula’ spoke with the Los Angeles photographer Bruce W. Talamon, best known for his pioneering documentation of the worlds of soul, funk, R&B and jazz over more than three decades.

Serendipitously, at the beginning of his career, Talamon met and befriended Hammons, who was just then making a name for himself in the Los Angeles art world and introduced Talamon to contemporary art.  Talamon’s photographs of Hammons in those years, as well as the thousands he has made during their meetings in subsequent decades, form an indelible portrait of one of the most important American artists of the last fifty years at work, at rest and at play, a visual record reminiscent of David Douglas Duncan’s photographs of Picasso in 1956 and 1957, an important influence for Talamon.  His documentation of Hammons at work on the body prints, as well as his essay about the importance of Hammons to his own sensibility, are featured in the Drawing Center’s catalogue for the show, available here.  The exhibition continues through 23 May 2020. 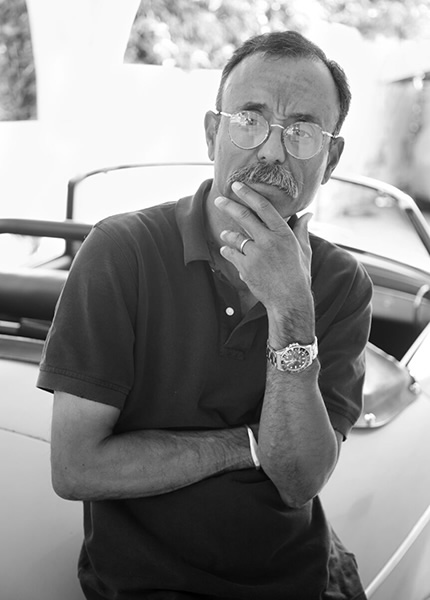 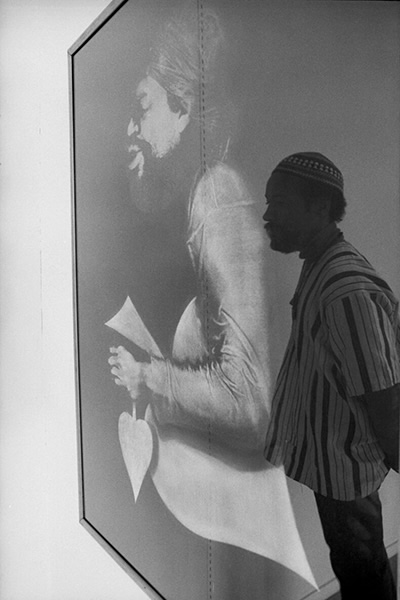 Randy Kennedy: How did you get your start as a professional photographer?

Bruce Talamon: Looking back on it now, it was a lucky accident.  I was an undergraduate at Whittier College and went on a semester abroad program in Europe.  In Berlin I bought my first real camera, an Asahi Pentax 35 mm.  And some of the first pictures I took were of Miles Davis in concert at Tivoli Gardens in Copenhagen.  I was a political science and sociology major, planning to go to law school.  I had always understood the power of the written word. But when I picked up that camera, an entirely different world opened up.  Now I could create a visual document – a record.  Those were my first concert pictures.  And that’s where I learned a valuable lesson: Stay out of the way and don’t mess up the vibe.  After graduation, I announced I was going to be a photographer.  That did not go over well with my father, James Talamon, Jr.  But eventually he understood.  I knew I wanted to be a photographer.  And I became one.  I had some generous teachers who not only offered guidance but gave me opportunities.

RK: You were deeply involved in the music world.  So how did you end up meeting David Hammons?

BT: It was in 1974, through a friend in the music industry at an outdoor music festival.  I was there on assignment working for ‘SOUL!’ Newspaper.  It was started in 1966, one year after the Watts Rebellion.  At that time it was the only national Black-owned paper exclusively devoted to R&B and soul music.  Working for them really unlocked doors for me.  David and I just hit it off.  I don’t know why we gravitated toward each other, but we did.  We would talk about everything – music, art, politics.  And even after all these years, that’s still an ongoing conversation. 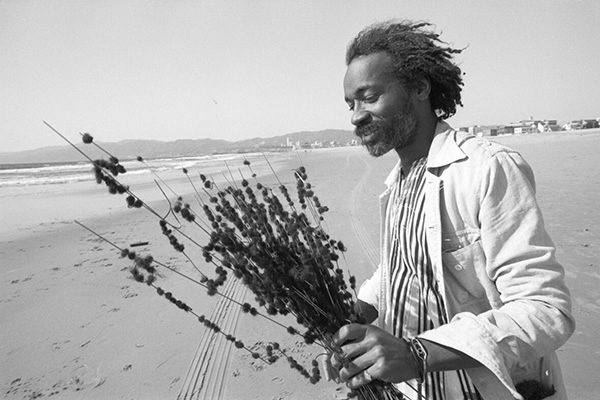 RK: How did he first ask you to start taking pictures of what he was doing?

BT: At that point he was working in a huge studio on Slauson Avenue, south of Leimert Park, a place that had probably been some kind of dance studio, with a huge open floor and beautiful light coming in through tall windows.  We started just hanging out, traveling together.  He might say, ‘Let’s take a ride out to Venice Beach…’  That’s how the ‘Hair Garden’ piece got done in 1977.  He’d say, ‘Hey look, I’m going out to do so-and-so. Do you want to come?’  We just started having these adventures.  I always knew to bring extra film.  Most of the time I shot Kodak Tri-X black & white, for that documentary feel.  Most times I shot available light.  Sometimes I would set up lights in his studio to document the work he was making and work that was completed, like the hair pieces and the series he called ‘Spades.’

‘Sometimes he would do performances without even telling me it was a damn performance. It would just sort of unfold on the street and I’d start taking pictures.’ – Bruce Talamon

RK: Hammons was revered by fellow young artists in those years and had some collectors, but he wasn’t very well known yet.  What do you think drew you to him as an artist?

BT: I was photographing musicians.  I think artists and musicians are kindred spirits.  David could have been a musician.  He had that same discipline.  He could have been a saxophone player.  Come to think of it, David did actually have a bass clarinet that sort of followed him from studio to studio.  I have to say that from the beginning I knew that there was something special about him.  I can’t describe what it was.  I won’t even make an attempt.  But I knew I wanted to watch what he was doing.  I was never hired, as such.  I was just around and the relationship was very casual.  And I had extra film because my editor was supporting me by paying for my film and processing.  And so she was supporting David, in a sense, too, as far as documentation.  David was making the body prints then, of course, and he was making sculpture and sometimes he would do performances without even telling me it was a damn performance.  It would just sort of unfold on the street and I’d start taking pictures.  Even in later years, when I’d go to New York for a job and David had moved fully to New York, I’d sometimes just run into him by accident.  He would just appear. 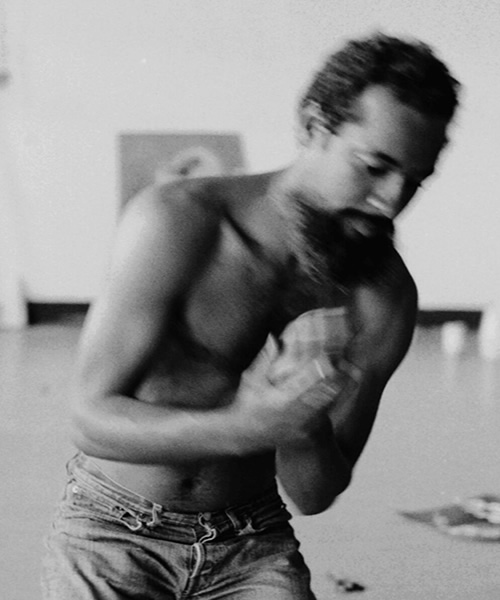 RK: Was music a connector between you?

BT: It very much was.  We were listening to Coltrane, Miles, Archie Shepp, Sun Ra and all of those guys.  And he’d see my pictures that I would take in the music world.  I would bring my camera and my lights into clubs.  And later I would show David these photographs, so he had a kind of entrée into my world as well as mine into his.  Our only ‘collaboration,’ if you want to call it that, was a series of screen prints we made together one night of a picture I had taken of Max Roach, for a proposed Max Roach album cover that never came to be.

‘David was one of the people in my life who taught me some things about art. He would say: ‘Use your eyes. Really look at what’s happening. And be patient. Just slow down. Spend time and watch.” – Talamon

RK: Did being around Hammons feel like some kind of crash course in postmodern contemporary art?

BT: I don’t know that I had a great sense of what was happening in contemporary art at large in those years.  But I learned, and I know that David was one of the people in my life who taught me some things about art.  He would say: ‘Use your eyes.  Really look at what’s happening.  And be patient.  Just slow down.  Spend time and watch.  Walk as much as you can.  Get out of your car.’  And that’s been a big thing for me to this day.  When I talk to young or mid-career photographers, I give them the same advice.  I say, ‘You gotta pay attention. It’s all around you.’  I’ve always thought of myself as a visual caretaker of Black folks’ history, and even at that young age I had a sense that making a record of all of it was important.  These photographs will be around long after we’re gone.  And did I know he was going to be the artist that he is today?  No, but it didn’t matter.  My friend was doing some exciting things, some wonderful things.  And we were having a great time.  I treated him with the same respect as the musicians I was photographing and traveling with at that time.  I wanted to record not just the performances or that end product.  David showed me that there was more.  Because of him I made a record of the process of getting there.  And maybe, along the way, I didn’t mess up the vibe.

Bruce W. Talamon (born 1949) has been a fixture in the film industry as a stills photographer for 39 years, after a prolific career capturing the royalty of soul, funk, R&B and jazz music in the 1970s.  A contract photographer for ‘Time’ magazine in the 1980s, his work has also appeared in ‘People,’ ‘Rolling Stone,’ ‘Ebony,’ ‘Vanity Fair,’ and ‘NPR.’  He is the author of ‘Bob Marley: Spirit Dancer’ and ‘Bruce W. Talamon. Soul. R&B. Funk. Photographs 1972–1982,’ published by Taschen in 2018.  His most recent project was set photography for the Universal Pictures film ‘News of the World,’ starring Tom Hanks.