Photographer Bruce W. Talamon captured these images of Bob Marley between 1978 and 1980 when he was granted unprecedented access to Bob Marley; on stage, backstage, center stage and unstaged. The resulting images are one of the most uniquely comprehensive collections of Bob Marley images available. The thousands of images were finally edited in 1994 to create the book "Bob Marley - Spirit Dancer."

I first photographed Bob Marley in 1978 for the black music magazine, SOUL!, which was based in Los Angeles. It was the first time Bob appeared on the cover of a black owned magazine in the United States. During the assignment, I was given access to Bob with no restrictions. That meant no publicist or handlers lurking in the background telling you what you could and could not shoot. I had total access. When I set out to photograph Bob Marley, my goal was to capture moments not seen. I was less interested in capturing the performance that everyone would see during a concert.

My interest was more in the preparation that ultimately became the finished presentation. Sound checks and backstage jams are infinitely more interesting to me. The dynamics of the working relationship between band members has always fascinated me. Also, I wanted to leave a visual record that went beyond the public image.

I will not discount the theory that there was a bit of Divine Guidance going on there, back in 1978. I remember remarking to my lab man that this was one assignment where it seemed that I was very lucky. I couldn't miss. Content, exposure, focus, angle... I look to page 80, backstage, warming up. To this day, I wonder what inspired me to place the camera directly on the floor, angled up and focusing through the top. I could have shot that photo standing up; it would have been just okay. I have said in every interview that this shoot was different. For the portrait session at the L'Ermitage Hotel, I brought a macro lens; I never bring a close-up lens to a shoot. That shot on page 2 became the original cover for Spirit Dancer.

My first picture of Bob was taken at the Starlite Amphitheater in Burbank, California. I was ushered into a smoke filled room. Bob, spliff dangling from his mouth, was standing in the middle of the room surrounded by band members running down the song order. I took one shot and sat back to listen and wait. Those days of unfettered access are now history. I shot formal portrait sessions, backstage jams, rehearsals, sound checks and performances. From the start, Bob was comfortable with the way I worked. He never asked me to put my camera down. The last time I saw Bob was in Paris; Charles de Gaulle Airport, January, 1980. We shook hands and he was gone.
- Bruce W. Talamon

Click below to listen to NPR's "Day To Day" Program (February 4, 2005): Bruce talks about his experiences touring with Marley with NPR's Alex Chadwick.

It has been more than two decades since Bob Marley's untimely death in 1981 but he is still a powerful presence worldwide. His music remains at the top of the reggae charts, while his memory is indelibly etched in the minds of millions of his admirers. In the last three years of his life, he met photographer Bruce W. Talamon, with whom he felt comfortable enough to grant unprecedented access, both on stage and off. The result of this collaboration is "Bob Marley - Spirit Dancer," published in 1994.

"Nowhere," writes Timothy White, author of "Catch A Fire: The Life Of Bob Marley" was the private warmth, social equanimity, and zealous determination of the man better captured than by the intimate reconnaissance of photojournalist Bruce Talamon... Marley's personal magnetism fairly pulsates within the frames of Talamon's shots.... A number of fine photojournalists did portraiture of Marley during the course of his career, but Talamon's work eclipses the other's simply because Bruce's non-intrusive style conveyed the ordinary way Marley actually lived his life in the peak years of his international acceptance. The book, "Bob Marley - Spirit Dancer" contains 90 black and white duotone photographs, printed in Italy, by Arnoldo Mondadori Editore, Verona, Italy. Roger Steffens' text creates a moving and informative essay from highlights of Bob's life, to intimate background obtained through hours of personal interviews and correspondence with Bob, his family and confidants which, with Timothy White's introduction sets the proper mood and framework to view the photographs. The only suggestion that these three contributors might add would be that the photographs are best viewed with Bob's music playing... LOUD!!!

KIRKUS REVIEWS
Issue Date: October 15, 1994
Talamon's duotone photographs capture Jamaican reggae star Bob Marley (1945-81) with a rough humanity... The Rastafarian Marley was indeed seen as more than a musician or entertainer by his most loyal followers... Marley had the role of prophet thrust upon him, and he accepted it. The photographs, however, show Marley exhausted, Marley with a joint in his hand, Marley ecstatic on stage, Marley with a joint in his mouth, Marley explaining pan-Africanism to Africans in Gabon, Marley thoughtful, Marley clowning, Marley very stoned. They achieve greater distance from Marley than does the text. As a result, they not only are more interesting but also convey more powerfully a sense of Marley's genuine charisma.

PEOPLE MAGAZINE
Issue Date: March 6, 1995
Marley's death from a brain tumor in 1981, at age 36, robbed the world of one of its most charismatic performers and ensured his musical legacy an enduring gloss of martyrdom and mystery. Spirit Dancer, published to coincide with Marley's birthday this month, views the musician with affection. At its core are the exceptional black and white pictures Talamon, a talented black American photojournalist, took of Marley from 1978-80. The broad planes and plunging lines of Marley's face-not to mention his whirling dreadlocks' form a kinetic landscape the camera loves.
- Eric Levin

ENTERTAINMENT WEEKLY
Issue Date: November 18, 1994
Reggae's greatest performer would have been 50 in 1995, and "Bob Marley - Spirit Dancer" is intended as an early celebration. Marley, who died of cancer 13 years ago, comes across in Talamon's black-and-white photographs as at once ferociously tough and elegantly fragile. Shot by Talamon in mid-concert, Marley is all sinew and style; caught in the lens offstage, the singer seems reserved... Gaze at this book while playing his music. B+
- Ken Tucker 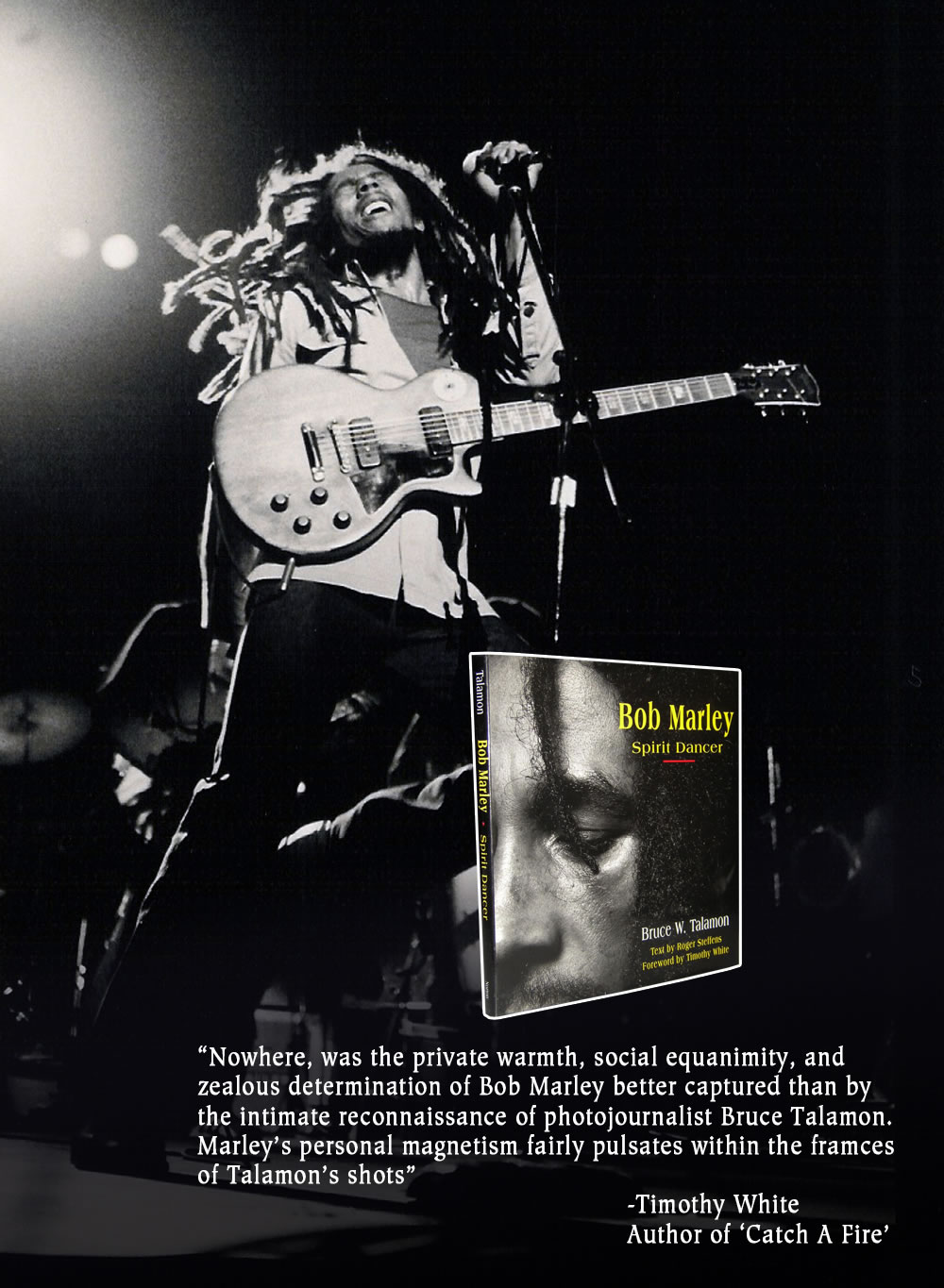 For More Info, Check Out...

The Best Bob Marley Site On The Net! These are the photographs from Bob Marley: Spirit Dancer, Bruce's 1994 photo memoir of his travels with Bob Marley that was published to celebrate Bob's 50th birthday. Hear Bruce's interview with Alex Chadwick from NPR (National Public Radio).