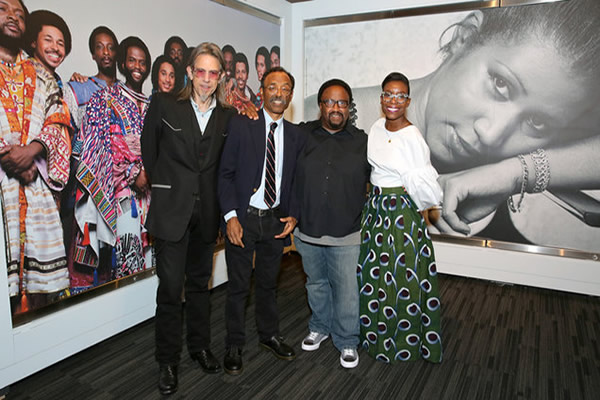 Total access. It’s become a rare commodity these days in terms of interacting with music stars and other public figures. But that wasn’t the case in 1972 when fledgling photographer Bruce Talamon snuck his way onstage at Stax Records’ Wattstax benefit concert and found himself two feet away from Isaac Hayes.
Recalled Talamon during a conversation with Grammy Museum artistic director Scott Goldman earlier this week (June 27), “That moment when I was photographing Hayes, I knew I was home.”

Talamon’s resulting black-and-white image of a bare-chested, chain-adorned Hayes holding a saxophone is one in a select series of jaw-dropping photos featured in the Grammy Museum’s latest exhibit. “Bruce W. Talamon: Soul, R&B, and Funk Photographs 1971-1982: A Love Letter to the Music” runs through Aug. 1, 2018. In turn, the exhibit is a preamble to the September publication of Talamon’s forthcoming book from Taschen Publishing,Bruce W. Talamon: Soul, R&B, and Funk Photographs 1972-1982.

Over a 10-year period working for Soul, Ken and Regina Jones’ seminal Los Angeles newspaper, as well as other publications, Talamon chronicled a pivotal and prolific period in black music history. Whether canvassing stages in arenas or small clubs, making his way backstage or hanging out at rehearsals, sound checks, costume fittings, dressing rooms or recording sessions, Talamon had a bird’s-eye view — and uncanny rapport — with artists that he calls “R&B Royalty.”

For example, one photo on display captures Muhammad Ali and Gil Scott-Heron chatting backstage at The Roxy in Hollywood in the ’70s. The pair, Talamon told the museum’s Goldman, were talking about how to free Nelson Mandela. “Sometimes it wasn’t about shaking that ass,” Talamon said. “Here were two activists who knew the power of their position, the power of protest.” 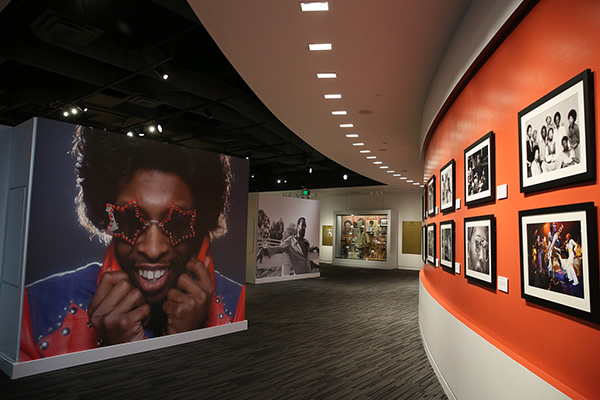 And sometimes, noted Talamon, it “was about the quiet moments.” As when he photographed Bill Withers with his eyes closed and hugging his guitar. Or when he composed the fascinating image of Earth, Wind & Fire’s Maurice White holding Talamon’s white strobe umbrella while walking toward the pyramids in Egypt. Museum visitors will also be treated to candid and fun images of Sly Stone, the Jackson 5, Minnie Riperton, Donna Summer and Chaka Khan, among others.
But for Talamon, photography was always about two things in particular: don’t “f@$k up the vibe” and respect the artist. “I was never asked to put my camera down,” he recalled. “Nobody said no — though Gil Scott-Heron came close — or not now.”

Talamon had no formal training as a photographer. During a college exchange program in Berlin, he decided to buy his first camera and begin to “capture visual history and make pictures that move” by using his Nikons and Leicas like film cameras.

“I was lucky,” added Talamon. “The access we had at Soul is a world that people don’t know a lot about today. You can’t get this close now. It’s a time that will never come again.”

Described as the first photo book ever published on soul, R&B and funk music, Taschen’s Bruce W. Talamon: Soul, R&B, and Funk Photographs 1972-1982 will be released in two editions. The first: an extra-large artist edition of 500 books in a clear plexiglass slipcase with a portfolio containing four signed photographs. The second: a trade edition without the slipcase or portfolio. Both will be released simultaneously and feature 376 pages, 300 photographs and a forward by Atlanta playwright Pearl Cleage.